Arnold Jackson was very famous and popular
from late 70s to mid 80s for
the American TV show called,"Diff'rent Strokes"

He grippled everyone's heart in America and
the other countries where the program was broadcast.

However after the TV show, what happened to him? 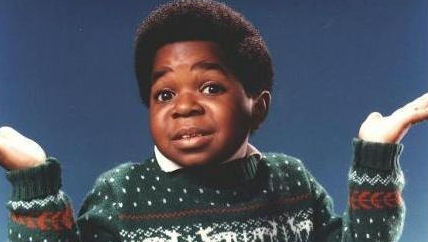 So many people lost themselves in him.

He was mischievous but wise and witty!

We totally adored him back then
and were looking foward to seeing the next episode.

The setting of the TV show was epoch-making!
In the show he and his brother got adopted by a wealthy white family, "Drummond".

This settig was happily accepted by the society.
The started in 1978 and ended in 1986.

Theme song caled, "It taks diff'rent strokes"
made a great impact on us as well.

In the show the line that he said went down with us.
That was one of the reasons why he was the most popular character.

Also he earned 100,000 dollars back then for a single episode.

In his real life interestingly enough he got adopted
by a couple of a nurse and a folklift operator.

However he was not lucky with health.
He had a chronic kideny diease since he was born.

So he had to take some treatments and medication.
Due to those effects, he had a dwarfism and ended up with being 142cm i nheight.

SMH! I just got another call to audition to play a 19 year old. I swear, I’m starting to feel more and more like Gary Coleman everyday. 😏 pic.twitter.com/rz7MC4T4OW

His line was just spot on!

As soon as he says that, everyone burst into laughter.

This line was just amazing and unforgetable.
He always throws this line in the right timing with the right tone of a voice.

How smart is he!
He had deep understanding in the story, that's why he could do that.

Arnold's life after the show

After ending the show, he had it rough.

In 1998 he was working as a security guard in a shopping mall.

At the shopping mall he refused autograph by a lady.
This caused a big argument between him and the lady.

He ended up with hitting her.

As a result he was charged with an assult.

According to the judgement, he received a suspended jail sentence,
and was asked to pay $1,665 hospital bill.

In 2007 he met a young lady called, Shanon Price at 22 on the film set.
They got married later this year.

Shannon was almost 30cm taller than him.

However they divorced in 2008.

Arnold running for a candidacy

In 2003 he ran for a candidacy fo the governor of California.
Interestingly enough one of his opponents was Arnold Schwarzenegger.

In 2010 he fell down the stairs at his house and hit his head strongly.
And he was admitted to the hospital.

Doctors did all the treatment that they had.
Unfortunately next day he passed away at age 42.

It was too early for fans.

Thank you for entertaining us with your charming smile and act.

Lots of child actors struggle
with their career after their puberty.

Their looks change.
Sometimes they don't get accepted by the world.

If that is the case, it is hard for them to accpet the change.
Up until recently their en tourage treated them like a king.

However they start treating them like an average person.
So they cannnot put up with the new reality.