Do you know Roswell Incident?

Roswell Incident is an incident that an alien that came out of UFO
that crashed in US in 1947.

This is a very famous incident.
What really happened?

That was a fake or real alien?
That stimulates our curiosity, doesn't it?

The inception of this incident was a press release that
was made by Roswell Army Air Field on the 8th July 1947.

In this documentation they stated that
they had picked up litters of UFO.
However after a few hours they amended that part,
saying that that was just litters of balloon, not UFO.

In the first place the spots where UFO crashed were two, not one.

Because in 1978 Stanton F Freedman who was studying UFO
conducted an interview with Major Jesse Marcel.

According to this interview,
American Army secretly gained some information about UFO.

After 2 years, in 1980 tabloid paper called "National Enquirer"
put the interview article with Major Jesse Marcel.
Because of this, this Roswell Incident got known by the world.

The litter of UFO and corpse of the alien were
brought to the nearest house and then were brought to area 51.
Some say that even now they have been examined and studied.

US government made an announcement that
the litter picked up in Roswell was a secret balloon.

Concerning litter of UFO and corpse of the alien,
they were mixed up with the memories of Crash on KC 97 aircraft.

Alien Autopsy, was it real??

What we are most intrigued about was the alien autopsy.
Was it real or fake? 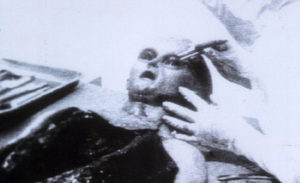 The film that took alien autopsy was black and white 16 mm film.
As of 1974 the film the American Army was using 3 different types,
16mm and 35mm in colour and 16mm black and white.

At that time they had a rule that colour film was to be used
when taking medical scenes.

Camera was not fixed

As of 1947 the American Army always had to use
2 fixed cameras to take medical scenes.

With the alien autopsy only 1 camera was used
and was held by hand, moving.

For that reason there is a possibility that
Kodak film made in 1947,
because Cine Kodak Super XX was not made in 1927 and 1967.

A professor Don Don Deli from McGill University
was interviewed by the Canadian newspaper called "Montreal Gazette"
said,"Roswell Incident was for real."
"There is no mistake that the American government hid it."

There must be something because such a prestigious person says that.

By the way we are looking forward to meeting aliens one day!!