Do you know mullet hairstyle?

It was a very cool hairstyle and
everyone had this hairstyle.

It was the must thing.

However today it looks funny, doesn't it?

When was this hairstyle popular?

What is mullet hairstyle?

Mullet hairstyle is that front and side are cut short,
and long at the back.

Usually it is men's hairstyle. 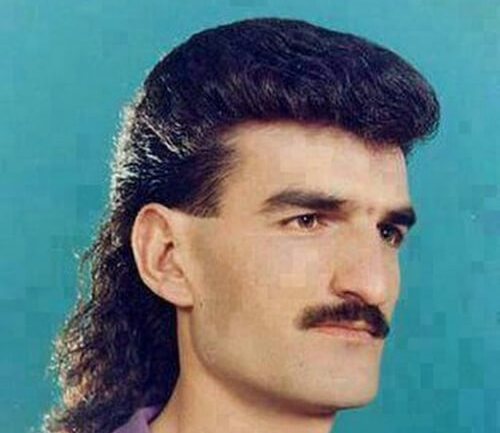 According to Oxford Dictionary,
the word "Mullet" was coined by the American hip hop group called, Beastie Boys.

They were the ones who made this word popular.

Originally this trend quietly started in 1970's and it became so popular in 1980's.

In early 1970's David Bowie who had long hair only at the back, became a popular singer.
With the popularity of glam rock, this hairstyle became the in thing.

After 1970's, mullet became so popular among the ordinary people.
And in 1980's it became massive!!

Who had mullet hairstyle??

With Michael Bolton @mbsings on the show, Jonesy thought he would quiz Amanda on the hairstyle he made famous, the 'Mullet'! MORE: https://t.co/Gwi6jemKYz pic.twitter.com/Ke0jOez5mm

Mullet was so popular before, but it looks bit funny today.
It often happens with fashion.

It was so cool but later on looks funny and odd.

On the other hand some fashion is cool forever.
For example Audrey Hepburn's old photos still look elegant and nice.
Even today many young people copy her style.

It is interesting that we change how we percieve things.