MC Hammer was so popular all over the world.

Especially his song "U can't touch this" gave us a big impact.
Hi dance moves were just amazing!

Also he made his pants so famous.

We often reminisce his song and dance.

So today let get a closer look to MC Hammer. 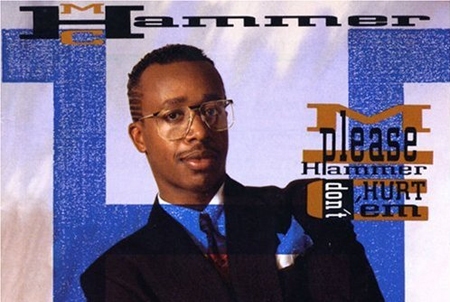 MC Hammer has liked baseball since he was a child.
He worked for Auckland Athletics as a ball boy.

He got his nickname "Little Hammer" at that time,
because he was similar to Hunk Aaron.

After he graduated from high school,
he was stationed in Okinawa province in Japan for 3 years.

In 1988 he had a break with his first album "Let's Get It Started"
and started dance boom in the world.

His dance moves on the music clip was so innovative.

In 1990 he made another big hit with his second album
"Please Hammer, Don't Hurt 'Em"

Especially "U Can't Touch This" that got some samplings
from "Super Freak" put the entire world into the vortex of his dance.

When he was at the culmination of his career,
he bought a mansion but the maintenance fee became tremendous.

At that time he hired 200 employees
and paid big amount of salaries to them.

Since he was spending so much money,
he ran out of his money and went bankrupt in 1996.

MC Hammer after his peak

After he lost his popularity, he experienced several different jobs
such as mobile phone sales person, insurance sales person and priest etc.

In 2001 he restarted his music career.

In 2010 he established his management company for martial artists.
In 2011 he made an announcement that he will make a new search engine.

In 2012 he had a show on the stage with the Korean singer "PSY".
They showed us the worldwide famous song "Gannam Style".

This collaboration was done because
PSY has been a big fan of MC Hammer for years and years.

His dance was incredible for a 52 year old guy.
With his dance move, we cannot help expecting him to do something big again.

MC Hammer's most famous song is "U Can't Touch This".

As stated above, this song got some samplings from "Super Freak".

In this music video he was wearing a eccentric pants.

Some people call the Hammer pants.

They are frequently and mistakenly referred to as "parachute pants"

They are customized/modified baggy pants that tapered
at the ankle with a sagging rise made suitable for hip-hop dancing.

They were popularized in the 1980s and 1990s by rapper MC Hammer.
They were inspired by harem pants which originated
in the Arabian Peninsula and introduced to Western fashion by Paul Poiret around 1910.

Hammer's specialized clothing line would come in a
variety of colors and were usually shiny and flashy-styled,
as seen throughout his hip-hop career during talk show appearances,
concerts, music videos and again on his own TV reality show in 2009 called Hammertime.

We still love MC Hammer.
He is amazing.

Especially his collaboration with PSY surprised the entire world.

Maybe one day he will be so popular all over the world again.