We all know David Bowie.
He was a legendary singer.
His sense of art attracted all of us til the end.
He is still alive in our hearts.
He will be ther forever.

Let us talk about David Bowie this time!

He had so many talents and was a wonderful person.

His musicality, gorgeous fashion and his sensitivity
gripped our hearts in the world.

Also he was very handsome and good loooking.

Some people say he is an eternal gentleman.
This expression was right!

David Bowie got married twice? How about his children?

In 1992 he got married with the supermodel, Iman Mohamed Abdulmajid.

In 2000 they got a daughter named, "Alexandria Zahra Jones."

He got married with model twice!
There you go!

Oh I am so jealous!

He was always good looking, so he seemed so popular all the time.

What happend to his eye?

He was very good looking and handsome.
But if you take a close look,
it seems his eyes look differen to each other.

Like so many promotion videos show,
obviously they are different.

In his left eye the pupil stayed open.

He was fighting against his friend over a girl.
They both wanted to date her.

Since then the pupil in his left eye stayd open.

However their friendship did not end.

Bowie actually thanked George for this.
Becasue of hie left eye, people had a mysterious impression toward Bowie.

Also on the camera they could get a mystique shot.

He is a superstar!

He did not grieve over his misfortune,
on the contrary he made teh best out of it!

That could be the reason why he sustained his career for a long time.

We need to learn this his attitude from him.

We tend to hate our weak points or hide them.
But sometimes it does not work.

If that is the case, we need to show it and be even proud of it.

His affinity to Japan

David Bowie got to know the Japanese culture in his early 20s.
He learned the Japanese tradition such as Kabuki and No.

He learned dance and pantomime from a dancer called, Linsday Kemp.

In Japanese traditional acting called Kabuki, there is a female role done by a male.
It is called "Onnagata."

Those attibutes of the Japanese tradition were extremely fascinating for Bowie.

We could say the costume used for Zuggy Stardust was impacted by the Japanese culture.

In 1973 Bowie came to Japan for his Japan tour.
He wore the costume designed by a world wide famous designer,Kansai Yamamoto.

He immediately started using the costume in his concert tor.

Bowie said, "Yamamoto's costume is everything that I was looking for."

"It is challengeing and provocative."

He then integrated more of the Kabuki element such as singing, dancing and art.

What he showed us was the total art, not just singing but alos danign and art to see. 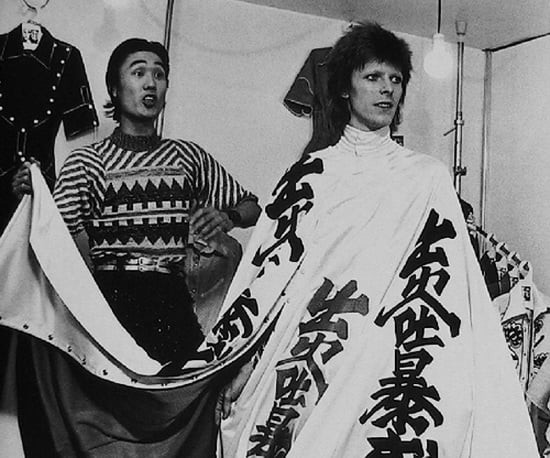 Did Bowie have another mansion in Kyoto?

Kyoot used to be teh capital of Japan before Tokyo
and has so many traditional busidings and cultures.

He loved Kyoyo to the extent that he has his own mansion in Kyoto.

However the rumour about his mansion is Kyoto seemed wrong.

Acutally the person who own the mansion was an another American called David Tido.

He was also David.

Bowie went to David Tido's mansion so many times.
Becase he lst himself in teh beauty of the house
that has a great assortment of the Japanese style of beauty.

David Tido taught him a lot about Japan and Kyoto.

Also he visited Kyoto on his honeymoon with his second wife, Iman.

This traditional hotel was founded about 300 years ago.
That makes us feel what Japan is like.

This time we talked about DavidBowie.

His existence influenced us immensely.

His challenging style left a deep impact on us.

Now he is singing forever.