Planet of the apes was an amazing movie.
This movie shocked and engulfed the world.

Especially the last scene was shocking!
We all thought they landed on other planet
but the truth is that was the earth.

We all learned something meaningful and important.
That is why it got big hit in the world.

Planet of the Apes

Planet of the apes was written
by the French novelist named Pierre Boulle.

Also movies was made by 20 Century Fox in 1968.
This movie still sustains its popularity
after half a century has passed.

Planet of the Apes Summary

The first Planet of the Apes hit the world hard.
The spaceship with 3 astronauts
Taylor, Dodge and Landon crashed on a planet.

However the planet was ruled by the Apes.
Also human beings were treated as a lower animals.

They met monkeys Zila and Cornelius who were interested in
intelligence of the human beings
and they were successful in escaping from the area of the apes.

The scenes of escape and trials are depicted interestingly.

They decided to go to the area called forbidden place
where monkeys never want to get closer.

When they got there, they found a doll.
The doll started talking when it is stepped on or pushed.

And Zila asked Zius the leader of the apes
the reason why human beings supposed to have
no intelligence can speak?

And then Zila got to know human beings used to have intelligence
and produced dangerous weapons.
But they had cons that they could not restrict themselves.

After being freed by apes,
Taylor was running on the horse on the beach.

He saw the statue of liberty buried in the sand of the beach.

And he got to know he thought he was in a strange planet
where apes were ruling.
But the truth was he was on the earth where they had been before.

As stated above, the movie was made based on
the novel written by a French novelist Pierre Boulle.

He wrote this novel based on his own experience of war.

At that time in the society of white,
white race was the best and the other were inferior. 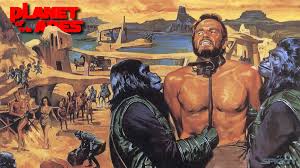 Japanese was a part of the coloured race.

At that time there was a distinctive discriminatory awareness.

Pierre Boulle was captured by the Japanese Army during the war.
He was treated badly by the people
who he was looking down on.

The experience was just a pain for him.

This experience that he had was the base for Plane of the Apes.

In other words planet of the Apes is the society where
the apes were ruling.

So it can be interpreted as follows;

Planet of the Apes was an amazing movie.
As stated above, this movie shocked the world.

It is still popular.
Becasue it is very meaningful.